The G7 is an informal group of 7 countries, currently, the United States of America, Canada, Japan, the United Kingdom, France, Germany and Italy.
This group reunites once year in order to apprehend some of the world most pressing issues.
After each summit, the host country publishes official documents explaining the topics addressed during the meeting and the outcome agreements.

The 2018 G7 took place in Charlevoix, Quebec, Canada, on June 8-9.
The burning issue of this year was the tariffs on steel and aluminum that Washington would impose on several allies.
Of course numerous other subjects were discussed, the seven came out with 4 commitments, 1 declaration, 1 Charter, 1 Blueprint and 1 common vision:

However, a few hours after the closing of the summit, the President Donald Trump tweeted his withdrawal from the consensus achieved during those two days, making those documents null and void.

Why are people complaining about the G7 ? 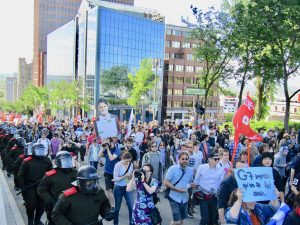 Criticizing the G7 is for most people not about criticizing international cooperation, but about questioning the legitimacy of this summit and the means used by the host country, this year Canada, in order to prepare it.
It brings up questions like, how come the leaders of the world’s most important industrially advanced democracies can take decisions about the world’s major issues without including in the process nor the other 188 countries recognized by the United Nations, nor the civil society ? Why create a process less binding and democratic than the United Nations to deal with issues addressed by the United Nations ? Do leaders of the most developed countries even consider the interest of less developed countries in their decisions ?
For many people, this summit is mostly a mean to ensure the hegemony of the seven, while the decisions taken strongly tend to reinforce social imbalance.
Regardless of this legitimacy issue, the Canadian population was really triggered by the fact that their country spent 600 millions CAD on the organization of this summit, mostly for the security measures. The day of the demonstration in the street of Quebec we could observe almost as much members of the force than demonstrators. 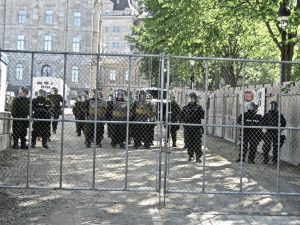 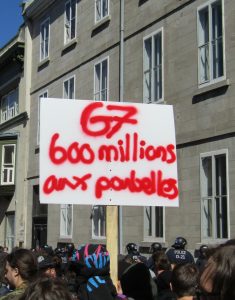 What are the demands of the demonstrators?

ACOCI (Association Québécois des Organismes de Coopération Internationale) request the seven to take several commitment regarding sustainable development including to confirm their engagement toward the Paris agreement, to take commitments to accelerate energetic transition, and to increase the ODA (Official Development Assistance).
The organizers of the demonstration demand the replacement of the G7 by another type of Forum that would not exclude any country. As a model they refer to the United Nations Climate Change Conference.
More about the events surrounding the G7 on: http://cfag7.org